I couldn't feel better about how things are going for Prairie at our new spot.  Her buckets seem to always be full of clean water (aside from the water-bucket-pooping incident) and she has a constant stream of lovely grass hay in front of her.  The paddocks are generously sized - and for a wet, soggy Northwest spring, we've got a good mix of grass and gravel being used.

We've also had the good fortune of Spring Break luring several of the kids away from the barn and a spring H/J show keeping a few trainers off site for the week.  This means I've had both the indoor and outdoor pretty much to myself every time I've tacked up.  Not a bad way to get settled into a new spot..

Prairie is settling in and making friends by peeing on everything and everywhere.  There's a Gelding to her left that she's quite certain is worthy of her womb, and a pretty Mare to the right that deserves sniffs and squeals on a regular basis.
I'm thankful for a nearby wash rack to try and keep her hind legs some semblance of clean(ish), but my god.  Trying to keep up with a mare in spring heat is damn near impossible...

In terms of rides, I got a good second ride in on Monday.  The sun was shining and yet again I didn't capture any of the magic.  Prairie was a bit stronger than she was Sunday, but we still had a solid ride.  we had more issues with her caving in on my inside leg and evading my outside rein, but all in all, we had a fairly even tempo, and she responded when I had the wherewithal to correct her.

I did stop to chat with another boarder for a few minutes, which was a good test of her patience.  Some pawing and some kicking as she attempted to remove her boots (why does she hate her boots SO much!?).. but after about five minutes she just sighed and took a nap, which I took as a good sign.

Tuesday S had the ride on her and apparently it was mostly stellar.  The rain drove them indoors which made for a few minutes of excitement settling in, but it sounds like they did ok.  Wednesday S had her again but they headed outside and managed to get lots of transition work done.

Yesterday I wrapped my week of strategic planning meetings (these come with bowl after bowl of peanut M&M's, twizzlers, frosted animal cookies and beef jerky.  I might be a different size now).  So as soon as we turned off the projector I dashed like mad to the barn.  The sun overcame the hail (wtf!?) just in time to skip the indoor and head outside.

Prairie warmed up well.  Still throwing her shoulder in on me, but figure-eights seem to help correct that, as do smaller circles thrown in every other minute of so.  We worked on adjusting her trot a bit, leg yields (we got some decent ones! yay! the leg yield button isn't broken anymore..) and lots o' canter transitions.

Currently the bane of our existence.  I take full responsibility for them, as I know that they are not an issue under steadier hands/seat/legs, but holy lord.  50% of the time we step up nicely underneath ourself into a nice, balanced, working canter.

The other 50% of the time, P2 scoots forward, hollows her back, drama-llama's her neck and panics.  It's hard to reorganize such a disaster, but I usually get it somewhat manageable after a lap or two.. ;)

Both of us were pretty exhausted after we worked both leads, so I played with a couple cirlces of stretchy-trot before cooling her out and grooming her up within an inch of her life.

S managed to pry off Prairie's chestnuts, which I shit you not - looked more like legitimate hooves than something abandoned by evolution a few millennia ago.. they were a good 1" long.  Really, not attractive... and we thinned her mane a bit and trimmed whiskers.

The sun was still shining so we grazed out in the orchard for a few minutes and tried out our new halter!!

I like it.  It fits her giagantor head and feels nice and buttery.  So far the only potential downside is that the logo/badge is right where a nameplate needs to go... I haven't decided if I'm going to try to remove the badge, or just nameplate the other side..
Almost makes her head look normal, right?

All in all, a fabulous day at the barn.  The mare gets Friday off (although her toes are getting done, as are her teeth and possibly some bodywork).  Then we're back to work on Saturday with Denali's Mom joining us!

She's a goofy looking girl, but she is looking mighty-fine! 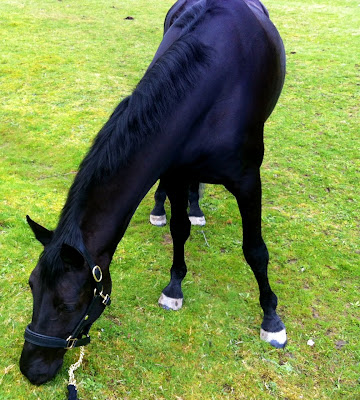