Correct.  Yes you read that right.  somebody let me out of the house with my checkbook (but not my visa.. where did that go???....) and apparently the end result is a new (cringe) saddle.

I love, love, love, love love my Prestige Optimax, but I do not (sadly) love it on Prairie.  Her shoulder is so upright that the balance of the saddle is all wonky and all the shims in the world don't make it feel like it should.
Add to that the fact that the tree is nearly a Wide, and Miss Prairie is really more of a Medium.  I'm not great at mental math but I'm pretty sure adding up those facts makes the Prestige sub-optimal choice for the new mare.

This realization makes me sad for a number of reasons - The first is I spent a really pretty penny buying the damn thing and only got to enjoy it on P1 for a few months before she went off to Summer Camp and decided to show me what her body is supposed to look like (hint, it's not something you'd put a "wide" saddle on).  But, I dutifully kept the Prestige in the garage - clean and covered just waiting for a new mare to put it to use again.

Sadly, buying a new horse to fit the saddle didn't work and The Boy has firmly vetoed a third horse that would justify keeping the Prestige (smart man).   Additionally, while Prairie lacks the, um... demonstrative tendencies that Pia has for even the slightest less than perfect fit - it doesn't seem fair to strap a mediocre fitting saddle to her back just because she won't buck me off as punishment.

(see how I made a new saddle sound like a responsible decision??? that's what I do.  I justify things...)

So, we've been on the hunt.  We've looked a few consignment saddles at the local shops, but nothing has been outstanding.  Finally I had my favorite fitter out and gave her strict instructions to not tell me the cost of ANYTHING until we see what fits Prairie, and then what fits me.

This seemed like a good decision because I tend to gravitate towards the pricier end of my available options under the misguided assumption that the prefect piece of equipment will no doubt solve 90% of my problems... Cognitively I know this isn't true, but my subconscious consumer figures that throwing money around usually doesn't make problems worse... it just wastes money.

Anyway, the fitting process began and I learned an interesting fact about P2.  While she is a traditional Medium width, her back is flatter than most of the panels on mediums, which means most "off the rack" medium trees fit nicely up front, but the rails/panels have too steep an angle for ideal fit.  (this concept took me a while to wrap my head around, but as I watched saddle after saddle land on the mare's back I started to see how the shoulder/wither clearance was great, but the panels of quite a few saddles looked like they were on a knife edge along her spine.... Apparently this mare was going to be trickier to fit than I had initially thought.

I quickly ruled out all the consignment options that Saddle Fitter had with her and began considering ordering new.  Once again I reminded her not to tell me the price tag of anything so that my brain wasn't consider the advantages of saving $$$ or buying-talent when I was trying them out.

We narrowed the field down to three models (by two different brands) and hit the arena.  Prairie seemed to move fairly comparably in all three on the lunge, but we ruled one out as soon as I sat in it.  The final two to consider were both  deep seat/narrow twist/pretty squishy options with medium knee blocks.  I switched between them a few times and finally made my decision.

"THAT ONE!" I proclaimed proudly, feeling as though I had made an objective decision.  Clearly the saddle I felt the most secure and balanced in, and something that P2 was nice and springy and relaxed in as well.

I won't even ask if you think I chose the expensive option or not, because I'm pretty sure that if you've read this blog for any length of time, you know without a shadow of a doubt that my heart/brain/checkbook always follows the $$$.  (dammit).

So here is what we got, a Hastilow (anyone out there heard of this?!) Elevation.

They're made in England by a "master saddler" and his brother and his dad.  All hand cut, all made to measure (which means my freaky long femur won't look out of place).  Plus two fun extra bonuses:


1) The tree is adjustable so there's a chance (a chance!) that this will also fit Princess Pia.

2) The swatch chain of leather options was DROOOOOOL worthy.  I should have taken a picture.  Part of me almost wishes Prairie wasn't black (did I say that!?) because there were so many beautiful browns to choose from, along with some bad ass piping choices which could have resulted in a slightly rainbow-esque saddle.  Ultimately I ended up with black (yawn) but with GOLD piping.  I almost got red cause that sounded sexy, but gold won't be obnoxious, and it has a better chance of looking good on other horses since the fabulous-adjustability means I'll obviously use this on every horse I'll ever own ever again.  right!?

In my post purchase internet hunting I didn't find much (but mostly favorable reviews thank god) along with a picture of one of their saddles with the gold piping.  I like it.  Not too in your face, but a little somethin' somethin' to set it apart. thoughts? I suppose if I hate it I can always take a sharpie to the piping and make it match... 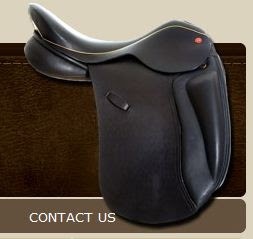 So it's on order.  Set your egg times for 10-12 weeks and I'm sure it'll be here before we know it.  After writing the deposit check (wah), we settled down to adjusting the shim situation on the Prestige to make it work for the next few months.  The fit is decent, and I feel more balanced, but it sort of feels like I'm trying to ride my horse with a pillow-top mattress between my seat and her back.  Not exactly a super close contact...