As I started dumping photos and videos and whatnot onto my computer I realized I have so much stuff from Saturday at the Clinic that I really need to break it down.  Seems to make the most sense to focus on each mare one at a time, so I think that's what I'll do.

By either numerical or alphabetical order Pia/P1 wins the race so let's start with her:

The mares were equally calm and happy when we threw them hay in the am, which gave us time to wander off in search of more breakfast sandwiches before starting their workday.

After some long hand walks and grazing, we tacked everyone up and headed back to the Meadow for some breezing and to try to use the camera's cool slow motion feature for looking at everyone's gaits.

Pia was great.  She's gained so much confidence over the last year.  She's alert and eager but no longer petrified of things (at least when you're on the ground).  Reassuming his role as camera man, The Boy was on the ground, leaving Cappy to be ponied around with us.  P has been ponied but never been the pony-er, so it was interesting to see her shift from wanting to kick the crap out of him to slowly softening and accepting Cappy on her flank while she was being ridden.

We warmed the beasts up with some light walk/trot work in the morning fog before having Cowboy Man gallop them out one by one.
When it was P's turn, we managed a bit of an experiment and had her go both in her Aussie saddle (recently returned from the fitter having been narrowed) and my old Klimke Dressage saddle (which fits her "ok" but is a much less obtrusive saddle on her back).

P's run in the Aussie Saddle:

And P in the Klimke:


My relatively untrained eye doesn't see a huge difference in her movement but she "looks" more eager in the dressage saddle and Cowboy Man swears she felt softer in her back with the Klimke as well...

(as a side note, how cool are these clips!? basically the camera takes 5 seconds of footage at 400 frames per second, then plays it back at a normal frame rate giving you the 1:06 long video... can't wait to play with this more)

After P, we played with Aspen (my vet's big fun Dutch boy) and then P2 got her turn.  I'll save P2's absurd response to moving "fast" for her own post, but I'll just say that I'm pretty sure she scares herself with her own legs.

When everyone was done, we headed back to the indoor.  I put P2 back in her stall so I could focus on Pia and watched her work (for the second time) in the warm up arena amongst the chaos.  She was more forward Saturday than Friday, but her eyeball was still wild and she was not exactly thrilled to be there.

It's hard to tell in the photos (and some of the video even) but CM rides with a very light contact.  He doesn't want to shut P down, instead he wants her to use herself and rely on herself.  To a certain extent I think if I hopped on and asked her to go in a frame she'd either say "screw this" and get me off, or the work would be a distraction and would help her settle.  That's good from a "I need to warm up for my class" perspective, but not actually helpful in the "P needs to be comfortable and confident" perspective. (I know that sounds a little "woo-woo").

It took approximately 10 minutes to get the mare moderately calm and happy to the point that her ears were up and not pinned 100% of the time, but every time something "exploded" around her (A lunge whip cracking/lady falling off/ loose cow/etc) she'd lose it just a touch and we'd have to deescalate her again.

The really good news there is that she actually deescalated.  That wasn't an option before - if you lost her she was gooooooonnnnnnne for good.  So, kudos mare.  You're growing up. 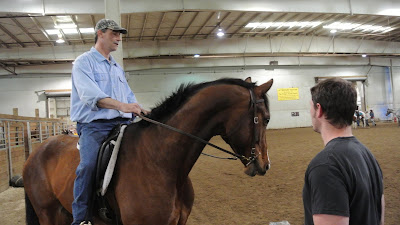 Parting of pacifying Pia included stopping for carrots every time she successfully got around the ring without a tantrum.  The Boy served as carrot dispenser...

Once P agreed to walk calmly around the arena, we headed into the obstacles to see how she would fare under saddle (again).  This time she was able to tackle a few more challenges without Cowboy Man having to get off and lead her through.  We took advantage of other horses in the ring to be leaders for her and P was quite pleased with that.

It surprises me (and confuses me a bit) that P is so forward, willing and calm about all the obstacles when you are on the ground... but the same obstacle is a no-go when you are mounted.... It's an interesting place for her to be.  Trusting with you at her shoulder, but still nervous under saddle.  Sadly for P, Saturday was the end of accepting that disconnect.  Cowboy Man decided that he had enough trust and enough history with P to really push her a bit more from her back.  We're also pretty confident that (especially in the Klimke) P's pain level is low-to-nonexistent so we can be pretty sure that her balks are 98% attitude only.  Part of getting that trust level back up is being really careful that we never force her into anything that causes pain.  If we ask her to do painful things... why would she trust us?

She wouldn't. And didn't.  But we're moving past that, and since we have a nice long history of asking for things that don't hurt anymore, it's time that P gets over the anxiety that something might hurt.

So, onward the mare went.  there were a few bucks, but for the most part she was appropriate in her objections.  Cowboy Man did hop off a few times to lead the mare through things, but he would immediately re-mount and proceed to repeat the process under saddle.

Here you can see that P is still not forward to some of these things, but she's also holding it together and not totally freaking out.  Would I want to run her cross country? probably not, but she's trying!

One last video of getting through that pesky car wash... this girl has a lot of try in her: