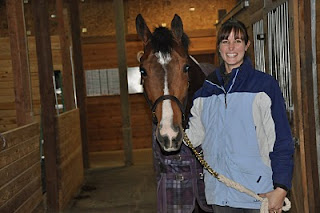 Ta-Da! It's Pia Mare!
So last night Pia and her mom made the trek up from Orting to Issaquah for the big move.  Everything went great.  I was super excited to see that Pia is totally content to stand like a lady in the trailer, and even happier that she backs up out like a super star.  Even when you hear that a horse "hauls great." It's always a relief to see it happen.  It's been so long since I've had a horse that was a breeze in the trailer that its just more icing on the already very pretty, super great cake. :)

We didn't actually do much yesterday.  I got to the barn and unloaded my tubs of crap.  Apparently the barn owner's dad does most of the handiwork, and he is quickly climbing my list of favorite people.  I maybe had my stuff in the tack room for 10 minutes before he had installed new saddles racks, bridle hooks and drying racks for my area.  and it didn't take any longer than that for him to notice Pia's new LIKIT on the ground before he had cut a piece of lumber to size and installed her toy for her.  What a perfect barn dad.  Projects NEVER get completed that fast on my watch...

Anyway, Pia settled in like a champ (at first).  Aside from trying to convince me that she was petrified of the puddle in front of a gate, she was totally happy to just look around and smell the new smells.  Her main excitement came from a lesson in the ring which apparently was very intriguing and it took her a while to decide that the cantering school horses were just going in circles and not signaling the start of some great stampede..

As it turns out, Pia has way more blankies than anyone I know, so it took a while to sort through all her closet, but I'm super excited that she is SET on clothing for a while.  I hate experimenting with blankets and figuring out what fits each horse and whatnot.. so its just one more fantastic bonus that her mom (Danielle), was nice enough to bring Pia up with her complete wardrobe.

So that was most of the night.  Until Pia decided that she was NOT interested in standing in her new stall quietly.  When we first put her away she was totally content to munch on hay, drink water and attack the Likit. 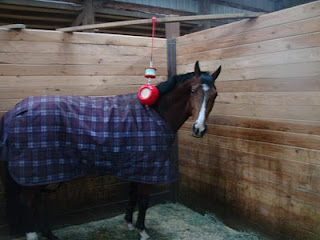 (Usually I think that when people put toys in their horse's stall it's to make them feel better about locking their beloved animal up all day and that the horse doesn't actually care about it at all.  But Pia is definitely the exception.  She appears to be totally thrilled by the likit, except for when it escapes from her and she gets mad at it... )

Anyway, after Danielle left, Pia waited a few minutes (nicely), then started total freak out mode.  Kicking stall walls, hopping around in little mini rears and pacing like a mother.  She worked herself into a nice sweat before I threw a halter on, gave her a treat and walked her a bit.  Apparently, much like myself, food and attention is all it takes to inspire relaxation.  However as soon as I left her back in her stall she was back to her freakout.

After about 45 minutes of her display, I switched her blankets (since her liner was nice and sweaty), tossed her a few more flakes of hay, and shut off the lights.  I didn't hear her scrambling around when I left, so hopefully she took "lights out" to mean that not much else was going to happen last night.

Sabrina is out there this morning to make sure she's quieting down, and give her a little walk around the property.  I'll head back out later to keep working with her and make sure that her stress level is going down, which I'm sure it is.

Here are a few more photos of Pia, Danielle, and myself from last night! 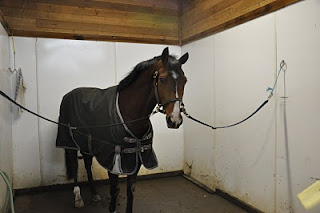 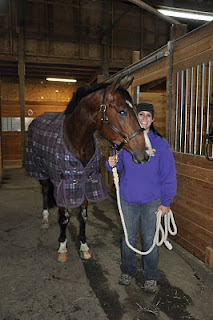 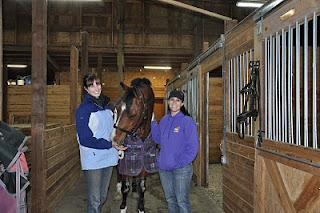 So, off we go! Time to set some goals, and move forward.  I'm giving myself until next Wednesday to get a good feel for where we are at, and then we'll work with Sabrina and see if we can come up with some objectives to hit by the end of the summer, and the end of the month.  I can't wait!
Posted by Gingham at 9:06 AM