Okie Doke.  While Prair is enjoying some well deserved time off and while I sit inside since its raining in the desert (still).  Might as well geek out a bit on the latest tack ho acquisition.

The Ice Vibe Boots.  Anyone have any experience with these things? They seem super sneaky and pretty cool and I kind of wish I had pulled the trigger on them earlier in Prair's rehab process.  But no matter - no time like the present to catch up on absurd purchases :)

So the Ice Vibes.  They are made by Horseware, which means we have access to one of their direct reps (and that can be interpreted as either access to a good deal, or access to peer pressure for all the cool things).   Basically they function both as a traditional ice boot and a sonicare toothbrush.  Why the combo?  Here's a blurb from their own site:


Ice-vibe can improve the realignment of the tendon fibres during the healing process. Cooling on it's own only prevents inflammation by resisting blood flow and slows down the metabolism. Ice-vibe uses the combination of cold and vibration which minimises swelling while encouraging blood flow and speeds up healing.

Big promises for such a reasonably priced boot...($280ish for the pair). 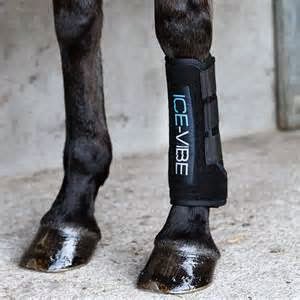 During Prair's rehab one of the biggest challenges was reducing inflammation while still encouraging increased bloodflow.  All of you who have nursed a soft tissue injury in the lower limb know how hauntingly sparse circulation is down there - and any blood flow is helpful to healing...

but inflammation on its own can cause problems... so what are you to do?

For Prair the stall rest (and reduced movement) was the primary "anti inflammation" treatment, while fairly aggressive (and sedated) walks were how we tried to encourage increased bloodflow.  Prair stopped all anti-inflam medicine (previcox, bute, etc..) which then had me worried how to keep her back comfy during this whole process.

Whether it helped or not, part of my plan was to just plaster the mare in Back on Track products to help increases/normalize circulation without causing too much heat...

So this is where the Ice Vibes would have perhaps been helpful.  Cooling to reduce the inflammation, then vibration to stimulate circulation.... (Sounds like an Icy Hot commercial..)

A few ladies in the barn have tried these (one with her reiner with another trainer) and they swear by them.  Seems to be a baby version of the Theraplate... something that I've heard lots of good reviews on... 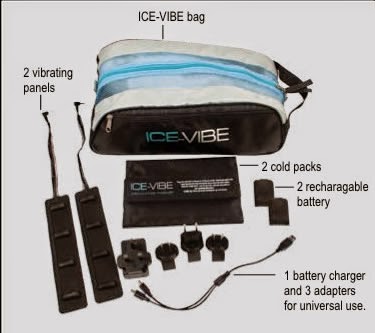 So I like the idea of them.  Especially at long shows where Prair is potentially getting sore/tired...

Will be sure to get you a full report once I actually strap them to the pony's legs... but for now I am intrigued.
Posted by Gingham at 7:19 AM