The final weekend was a total whirlwind, and I'm definitely in the midst of a horse show hangover.  I'm sitting in a pile of dirty horse laundry, dirty baby laundry and one very passive aggressive cat who dislikes his routine being disrupted for such an extended family absence....

But I just remember (what I can) of week VII before it all disappears from my laundry-addled brain.

We left off with Prair's wild success in the Open 2'6 division, marked by her win in a big class over fences. 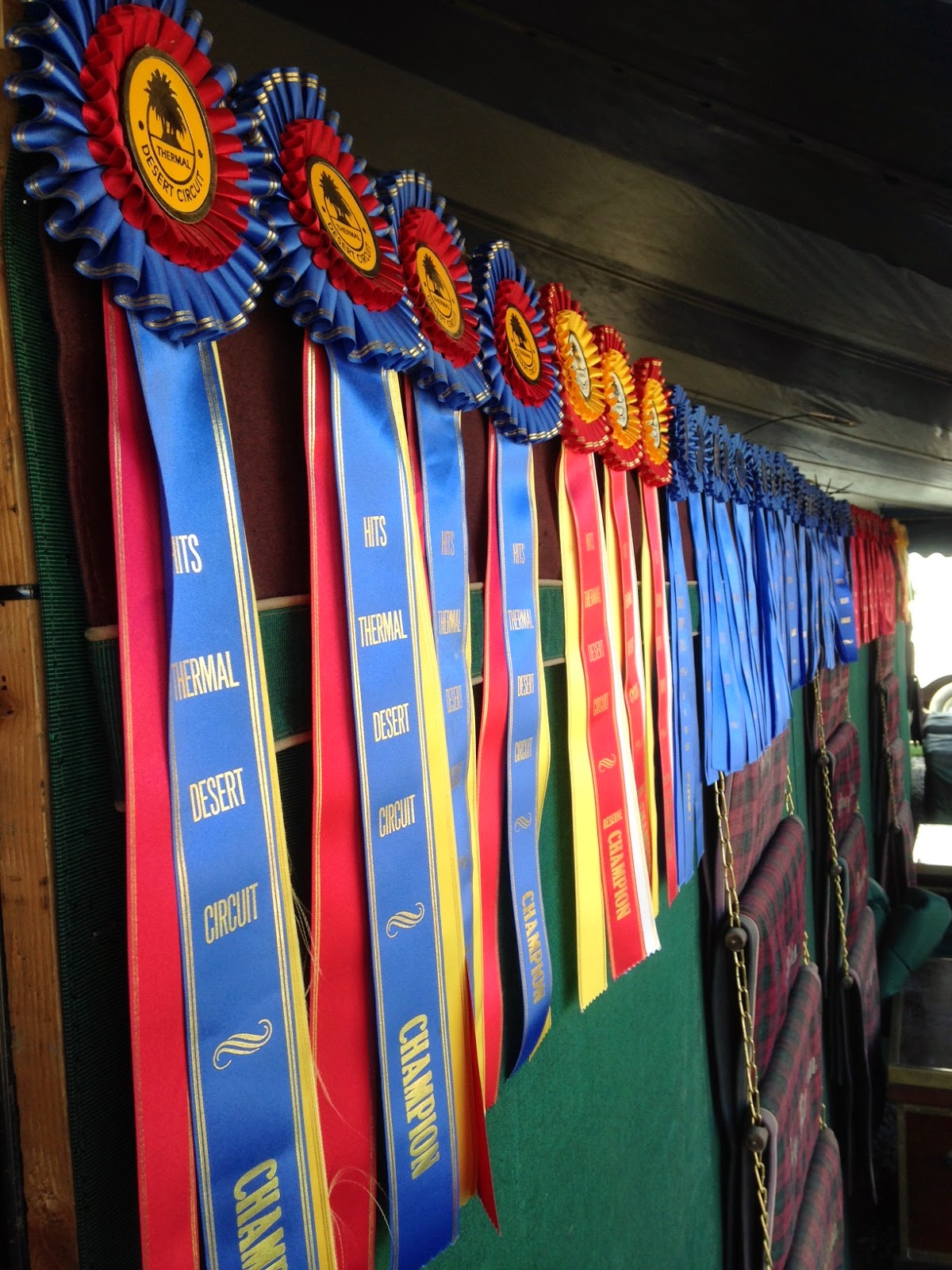 When I took over the ride on Friday, the mare felt awesome.  a tad more of a push ride than I expected, but I suppose that's reasonable after two long weeks on hard ground.

What felt great was the mare's balance and her changes.  She was much more responsive to my seat and much easier to balance for the change than when I finished up the previous weekend.  After a quick and soft warm-up we headed for the ring and knocked out of first division.

About all I remember is that we had four pretty nice rounds.  A couple late changes, but overall better and better, slower jumps.  The Boy returned to the show with a head cold which kept him home with baby - so I am lacking any videos or images to jog my memory of any remotely interesting details.

I do know the divisions were a tad smaller this week, I think there were maybe 16? We got stuck in a rotation with the cutest horse ever who has been kicking our butt all circuit.  He's small, but looks like an overgrown pony with a nice trot and just adorable jump - even over 2'.   By comparison, Prair's patented-2'-lurch look a tad less.... stylish.

Anyway, going back to back with him wasn't ideal in terms of judging, but we still came away with a 2nd, 5th, 6th and 1st over fences.  Added to a win on the flat and we snagged Reserve behind Mr-Cute-Pony-Pants.

Saturday started with a fun 2'6" medal, which I hadn't been participating in the earlier weeks.  The course looked fun but all of our rollbacks and bending lines were on our right lead (doh) so I was perhaps a bit nervous about that.  Prair and I were first in the order (ugh) which didn't help my nerves.

Amazingly, we landed all our leads and were having a flawless round until the final rollback which was pretty tight and to the right.  I sliced the first fence slightly to get a better angle, landed balanced and on our right lead... then braced a tad and lost the stomp in Prair's hind foot and she didn't see the next fence so we sorta.... stopped.

I don't love that Prair is backing off and downshifting when she's confused, but I suppose it might be a step forward from blind panic and bolting.  Who knows.. I'm trying to tell myself it's a step forward and not that I'm actually turning my mare into a stopper.

I tried to console myself with reminders that we haven't even schooled a rollback since the same medal last year, but still.

I got even more frustrated when I watched everyone else have at least one medium bobble so I'm pretty sure if I could have erased the stop - we would at least have been called back to test.  Argh.

Right after the medal we rode our three rounds for our 2'3" Hunter.  I recall great rounds with maybe one late change, but the judge didn't use us much.  There were about 20 of us and we missed the ribbons when we had a late change but eeked out an 8th and 7th in our last two rounds.  We came back a few hours later to win the hack and boost our confidence a bit.

Saturday afternoon I had entered the 2' Eq again.  When the temps hit 88 I was seriously questioning why I thought three more rounds were a good idea and when I pulled the mare out of her stall for a third time, her expression echoed that sentiment.

But we ambled back to the rings and wilted in the sun while the course was reset (ahem- lowered) for our division.

Let me correct that - I mean "division" in the loosest sense.  Apparently only two other ammys were delirious enough to think that bumbling around 3 rounds in the height of the afternoon heat sounded like a good idea.

What we lacked in competition was made up for by a mercifully brief outing.  Seemed everyone was eager to be done, so warm ups were brief, everyone pre-loaded into the ring and I think the whole thing (including flat) was done in 40 minutes.

My only challenge was that this was our first time showing in Ring 3, which is substantially larger than our normal rings, and it has a weird berm at the end (where they sometimes place a jump) and an irregular zigzag fence line by the judge's booth.

The courses themselves were normal hunter lines, so I really only focused on keeping Prair's attention and holding her straight when the jump lines didn't mirror the arena fences... I was pleasantly surprised by Prair's focus and total lack of concern for the new ring.  Our only tense moment was when a horse in the ring next door went down their outside line as we went down ours and Prair maybe thought they were racing.

Out of a whopping three we placed 2nd, 1st, 1st, then won the flat for another championship, though it didn't feel like a big "win."

Don't get me wrong, I still snapped up my ribbon and cooler, but it's not like we beat out a huge crowd or were tested over difficult courses for the honor..

Sunday our last division of the circuit was our 2'6" Modified Hunter.  Again, smaller numbers.. maybe only 20, but holy smokes, there were all beautiful.  I enjoyed watching a few rounds before we started our warm-up, but Prair didn't feel great.  She was stiff, heavy and really (really) reluctant to move off my leg.

We switched to a warm up ring with better footing, but still, the mare was slooooooow.  It was hard to get her going for a few warm up fences, but after talking with N we decided to head for the ring and see how she was.  N felt like all the horses were getting a bit foot sore and reluctant, but that Prair didn't look (or feel) off on one side or the other.

Our first fence in, I just couldn't get a pace and we pulled up.  After that we got rolling, we finished ok.  N and I talked, and thought maybe we should scratch but didn't want our last round to have a stop.  So we went back in, got a nice clean round (with great changes) and called it a show.  Prair was listening, focused and trying, but I could feel her backing off at the fences and that she was jumping flatter than she had been.. I didn't like it and neither did N.

In hindsight we probably didn't need any jumps on Sunday, but the previous two weeks Prair hadn't felt so worn out at the end of the weekend... so finishing with our "normal" 2'6" division seemed like a fun idea.

I've never felt Prair so tired/sore/cranky about moving off my leg, so I'm hoping all is well.  Hopefully some time off, some previcox and a one over by our vet will have her back to feeling fresh.

Thermal 2015 is in the books.  I'll keep digesting our trip and post some thoughts and observations, (along with an update on Prair's leg when the vet sees her Wednesday..) but for now, those are the basic details.