Well, I have to be honest, after the drain of holiday shopping, and dinners and engagement announcements (whee!), I was about two steps from bailing on the barn and just going to my good friend's house to plop on the couch and get in some quality veg time before she moves to NYC without me on Sunday.  (wah)

But, I stumbled onto Sarah's post and realized that when feeling stressed, always, ALWAYS go to the barn and groom your pony.  ALWAYS.

So I did.  And I'm so glad I did, because P needed some play time, and apparently so did I.

I still didn't quite feel like riding.  A bad ride would have sent me over the edge, but I did feel like nuzzling, and grooming and playing. So I groomed the mare up and took her to the ring to get her kicks out and we played tag.

She's really good at tag.  She runs away from you, then turns around and runs back when you run the other way... It's fairly entertaining.  The only problem is that since I have a "limited" (zero, none, nada) cardio-capacity, and she has lots - she gets cranky when I get tired and stop chasing after her.  And by cranky I mean, she tries to chase me and if I don't run away and play then she turns around, gives a buck and runs off, only to try to entice me again.

This, is what happens when I stop playing:


After we ran and chased, and I got tired, and the mare got her bucks out, we just walked around the ring to cool her out and I tried to document how good she is with her ground work even without a halter.

You'll have to forgive my iPhone cameraman skills. They are poor at best.  Maybe better described as a drunk toddler running around on uneven ground...

But still, you get the idea...

Basically it was a nice day.  I finally organized my tack locker and re-wrapped all my polos and standing wraps... so things are at least a semblance of tidy.  As predicted, I left the barn feeling happier, calmer, and a little more loved.  If there's one thing this mare does well, its give hugs and wrap her big giant head around you. 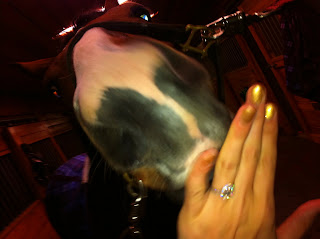