While scrubbing away at tack this weekend, I managed to pull out some of my extra bits and pieces to just tidy up the tack locker and at least have things moderately clean while they aren't in use..

I stumbled across my pretty stubben golden wings double jointed snaffle, that I took off P's bridle last week and decided to polish it up before retiring it.   As I was fiddling around with it, I had one of those jaw dropping, WTF-What-Have-I- Done moments where all of the sudden things snapped into focus.

As animal owners, I feel that we take our own version of the Hippocratic Oath that so many medical professionals swear to prior to taking blade to flesh. Maybe it's still the hippocratic oath, but it's the HIPPO(greek horse)cratic oath, not the hippo(greek philosopher)cratic oath.

First, Do No Harm.

It's a simple concept, but one that I ascribe to with my creatures.  My first goal is to never, ever, under and circumstance cause them pain or damage through any of my actions.  If Pia wants to be the next greatest eventer, fantastic.  But I'll never ever gallop her XC until I know that her compromised wobbler-balance isn't going to put her at risk for strains and sprains.

I'm never going to use any devices or methods that rely on pain and fear when there are other paths.  I'd rather have a fat pasture marshmallow than knowingly make the life of any animal of mine worse.

I would imagine that this is a sentiment that nearly all of us have in common.  It's also what drives deep painful guilt when I discover that anything I've done in my attempts to be helpful or kind have backfired or had unintended consequences.

I had one of those stomach churning moments this weekend as I turned my old bit over in my hands... and I don't know how I didn't realize it sooner.

Basically, the nice "wings" on my snaffle which I admired for their very effective ability to totally prevent any pinching from the bit rings, are constructed in a totally crap-tastic way that essentially forces the weight of the bit and all rein pressure onto a horse's tongue AND when really using your brakes, it basically crushes their entire jaw and cheeks.

Smashing, that's just what I was going for when I purchased a chunky, double jointed loose ring snaffle for a relatively green horse.

Let me show you what I mean: 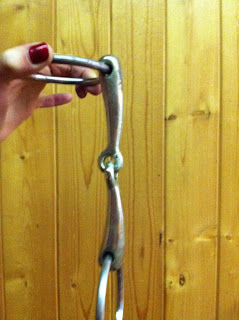 notice that when the bit ring is "flat" (imagine it against your pony's face), the regular loose ring falls straight down and allows for the mouthpiece to float and move at almost any angle.  When you apply rein pressure, the joint bends, and the resulting "nut cracker" effect occurs, but is released when you soften your hand.  Make sense? 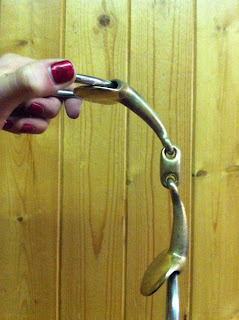 Look at the "golden wings" bit.  When the bit ring is flat (as it is when P is fully bridled), the solid "wing" forces the mouthpiece forward at a pretty huge angle and "locks" the mouthpiece in that position.  That extra distance forward means that P is basically having her tongue choked down and that any additional rein pressure forces the bit HARD onto her bars and into the side of her face.

Not exactly what I would call an "innovative" design, nor does it produce the desired effect of a double jointed loose ring snaffle.

I don't know how I never saw that reduced range of motion on my bit.  I don't know why I didn't think of INTENSE MOUTH PAIN having anything to do with why P didn't want to take the contact or why she was constantly diving, curling and objecting to any leg that pushed her into the bridle.  I should have realized it when the vet-wrapping of the mouthpiece temporarily alleviated some of her behavior issues.. but I didn't.

I don't think this is the only issue at hand.  I do think that there are other factors (like her hormones) that could be part of this.  Lord knows if I was in screaming, bitchy pain from cramps and you shoved a death bit in my mouth it might just be enough to send me over the edge to loony-town.

Oh, and to top that off, when saddle fitter lady was out to check P's new toy, she checked the BO's saddle just to offer an expert opinion, and noticed a crease in the leather on the underside of the right panel.  BO had been told by her saddle maker that the crease was her fault and formed as a result of improper saddle storage, but that it was no big deal and wouldn't affect the use of the saddle.

Saddle Fitter lady said that it wasn't from storage, but rather the cording (that runs at the bottom of almost every saddle's cantle to assist in the seaming), had come undone and SLIPPED into the flocking, basically causing a 1/4" bead of sorts that created an incredibly uncomfortable pressure point.

AAAAHH.  So my horse who's been ouchy and stiff on the right side and avoiding the bit, has been telling me (though hardly politely), that her bit was scissoring her mouth and the saddle essentially had a ROCK sticking out on one side.

Oversimplification? yes (she's been wearing that right hind oddly forever and prefers to sit behind the vertical even in pasture..) but still.  Bad owner. Bad, bad, owner


First, Do No Harm. Then proceed with training and go for improvement...
Posted by Gingham at 2:36 PM