In attempting to learn more about the use of a "clammer" or even its historic training application I've been doing lots of google searches, and have had a really hard time finding much of anything (or anything at all really).  Makes me think that there must be another term out there for this particular little bit thing that I just have never heard of.

The back story on it for Pia is that it came from the BO and in turn was something she picked up while training with her super-fancy-national-champion-olympic rider.  SFNCOR suggested it as a method to keep smart/energetic horses distracted and playing, and also a method to lighten a horse in the hand without adding leverage or any severity to the bit currently in use.

I also know that BO was only able to obtain one up in Canada, which makes it slightly less than accessible, but I would think that unless the cannucks have gone completely crazy and disconnected themselves and the great white north from the interweb, that I'd theoretically be able to find one of these things online.

Anyway, I have no documented history, instructions, advertisements, suggestions, opinions or merchants for one of these, but I do have the BO and SFNCOR saying that they have "tried it" and it's "worked."

Frankly I don't much care what it is or where it came from if it makes the mare happy and it doesn't cause any pain.


As I said before, It's basically a little baby snaffle that you just rest behind your current bit.  So, when it's on it's own and hanging from a tack hook it looks like this: 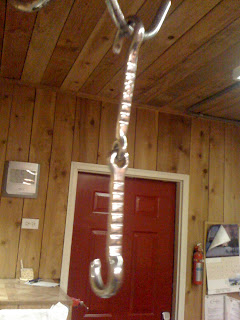 Those little open hooks slip around your bit ring, so that when its "attached" it looks something like this: 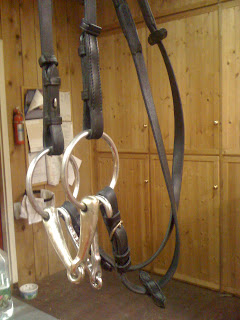 Essentially, it gives P something to clank around on, but it receives no action from the rein and applies no additional pressure.  Admittedly, she's gotten then thing unhooked and out of her mouth twice, but it doesn't seem to freak her out (or even bug her) when that happens, so I'm letting it ride.   Although yesterday, when she unhooked then unceremoniously spat the thing out, I just kept riding and she seemed to continue on as happily as she had with it in.
Long story short, it seems to have really helped prevent her diving onto her forehand, and is helping Pia accept a little more contact without curling behind the vertical - but I'm not sure we "need" it.  If we're accomplishing half our ride (including the dreaded right lead canter) without the clammer, maybe it doesn't need to become a staple in our ever increasing tack assortment.
Yesterday, I tacked up with the clammer, and lunged the beast briefly before getting on.  She was slow to the point of pokey, which got my "oh crap, is she lame" thoughts spinning.  The answer is no.  I don't think so, since after about 10 minutes she opened up and relaxed a bit more.  But still, when the mare comes out with her head up and her stride about 8" long, it makes me think something is up...
Our ride was lovely.  I had to have a few little conversations about how to NOT blow through my outside leg, but I didn't have to dismount and smack her, and I didn't get a big buck ever.  The real successes of the ride were that P held a nice tempo and frame for 90% of the time. She only got speedy and on her forehand when we were doing prolonged canter work.
BUT, the beauty of that statement is that we were doing prolonged canter work.  Something about either her cavaletti days, or the bit change or something, has reversed the mysterious refusal to canter and P was happily popping into her canter both directions, lightly and immediately.  Clean upward transitions, and decently balanced downward ones.  I even snuck in a bit of counter canter (well.. figure 8's) and did some nice, "shoulder-in, 10m circle, haunches it, straight, canter depart" series down the long sides.  I did minimal leg yields, but there were as soft, even and balanced as they have been in a while.  Her balance and tempo meant that we achieved some even, consistent movement with the always coveted "every step the same." from rail to rail.
Today, our saddle fitter comes back out to double check the fit of our new Italian crush, so Pia will get a nice light hack, and extra treats for being such a good lady.  Also, I got all inspired last night to make all the ponies at the barn some yummy cookies this weekend and hang little stockings on their stalls.  Anyone have a favorite made-from-scratch recipe?
Posted by Gingham at 10:49 AM