Last night between late meetings and a holiday function I dragged The Boy to the tack store's holiday shindig.  It was a veritable zoo scene as you can imagine is the only logical outcome when horsey people get all hopped up on (cheap) champagne, snacks, the promise of a newly acquired one-night-only coupon and the smell of fresh leather filling the air.

It was like some sort of deranged feeding frenzy, except instead of scary looking sharks or lions, it was impeccably dressed ladies, dripping in diamonds, Pikeur and the inevitable horse hair/snot/mud paste that comes from spending any time at a barn in the winter.


Everyone was greeted at the door with their swag bag of goodies, which included new winter boot socks for me, and lots of treat samplers for Pia... 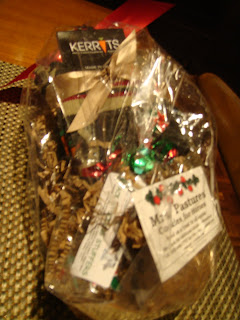 I took one look at the swarm of women by the food and drinks (one must be fortified to shop amid a throng of crazed horsey people) and diverted my path to the back of the store where a bounty of new dressage girths were dangling just waiting for me to blow my gift certificate and handy-dandy one-night-only coupon on.

My favorite saddle fitter lady was there, so we chatted for a bit, and she pointed me at her favorite girth (Prestige... shocker) and favorite fuzzy cover.

So, I am proud to say that in a matter of 8 minutes I was in, out and on my way with swag bag, girth and fuzzy in hand.

The boy commented that he was impressed with my speed... at which point I felt compelled to reveal that the only thing shoving me out of that store so quickly was the crazy zombie throng of horsey people salivating over their one-night-only coupons and cheap champagne.  2pm on a Tuesday and I would have been through combing through the racks and shelves for hours....

Anyway, here's our booty.  One lovely contoured girth, and a fuzzy that actually accommodates the contour.  I'm hoping that with a padded girth and a sheepskin, I can ditch the foam girth channel that I love, but really makes P super sweaty and I can't imagine feels awesome on her skin...

First our pretty girth (on top of the new sheepskin) 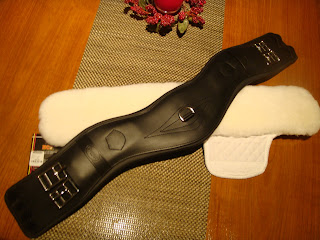 and Second, the fuzzy on the girth, with two velcro portions which allows for the curve of the girth... (sneaky!) 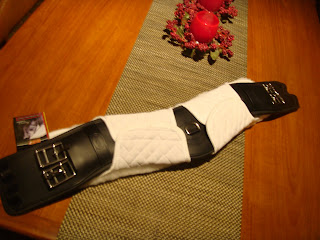 I'll try it out on Miss P this evening and cross my fingers she loves it.  I can always take it back, but with the one time only discount AND my gift cert... it was a great deal and I hardly felt the pain of shelling out more dollars to Prestige, though I'm fairly certain they can now claim a significant portion of my former net worth...

Also on the docket for today is another trim.  I'm hoping to gain some insight on P's funny feet and maybe brainstorm on how to further aid her barefooted-ness.
Posted by Gingham at 2:52 PM